Anna’s Oven, a strange combo of tasteful cafe, comfort food emporium and charitable endeavor may have good food but I’ll probably never find out. It’s not the menu or the concept that rubs me the wrong way, but the execution is simply substandard due to an apparent lack of good management and oversight. The space has been attractively renovated and is barely recognizable from its days as Matchstick BBQ, a short-lived but fairly solid breakfast and smoked meat joint on 39th Street West. Given the name and the interior vibe, I would assume that Anna’s Oven specialized in fancy salads, vegetarian fare and overpriced soups, but the menu trends toward updated versions of American classics: meatloaf, roasted chicken, macaroni and cheese and desserts like cobbler and bownies. They open up at 11am and I strolled in about 11:40, eager to try the meatloaf, which Mr. Ferruzza enjoyed on one of his visits. Alas, they were out of meatloaf, which I assume meant that it hadn’t been made yet, given that they had recently opened and there was only one table occupied. The woman at the counter also warned me that they did not have chicken pot pie, which had been prominently advertised on the sandwich board out on the sidewalk. So I opted for chicken and noodles ($7) since it is a relative rarity on local menus and they advertise that the noodles are house-made.

The woman from the counter ran the front of the house by herself on my visit and spent a lot of time talking up the charitable aspect of Anna’s Oven with the few customers that strolled in. The business apparently gives a percentage of sales to the Friends of St. Anne, an organization that supports the work of a girls school in Kenya. Being a curmudgeonly old cynic I don’t pay much mind to this sort of thing. After all, what an odd choice of charity. It may have personal importance to the investors of Anna’s Oven, but I have no assurance that a religious school in Africa is more worthy of funds than Harvester’s, Big Brothers/Sisters, Amnesty International or the Heifer Project. Let’s be clear: I think charitable business ventures are an excellent idea, but this one seems too specific. I don’t want to research the charity before spending my money there. And it certainly doesn’t give them a pass to be a crappy restaurant.

Anyhow all this chatting about St. Anne’s really cut into the time the server was spending with other customers as more people slowly drifted in. She was supposed to bring out a bottled beverage to my table that took longer than the 25 seconds it should have taken. When she wasn’t with customers she was mincing garlic on a cutting board behind the counter and ignoring everyone. Basically you can forget about getting any attention once you leave the counter.

We must have waited 30 minutes for our food, so long that it almost became funny. While we waited I witnessed the wrong order being delivered to another table in the joint, and the wrong order given to a person waiting for takeout. Food was returned to the kitchen and fixed or remade apparently. This didn’t bode well. At least I had a bottle of Boulevard Wheat to keep me company.

Imagine my lack of surprise when the chicken and noodles arrived and the waitress explained that these were “not the usual noodles” because “they didn’t leave us any from last night.” What I received was a bowl of store-bought rotini with bits of chicken distributed throughout and maybe a 1/4 cup of watery broth hiding underneath. It was certainly not “yummy thick broth.” There was not even any garnish. Wanna see it? This should really be obvious, but if you advertise house-made noodles in your dish and intend to substitute dried pasta, you should inform the diner first. 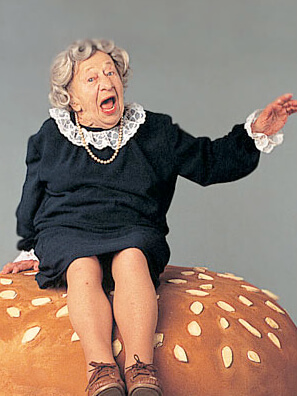 The dish was completely substandard and highly disappointing. It reminded me of something you make at home when you’re drunk and only have pasta and a leftover chicken carcass. I was annoyed, which you can probably discern from the general tone of this post. But there was no manager to speak to, just an unavailable server and a guy in the kitchen. 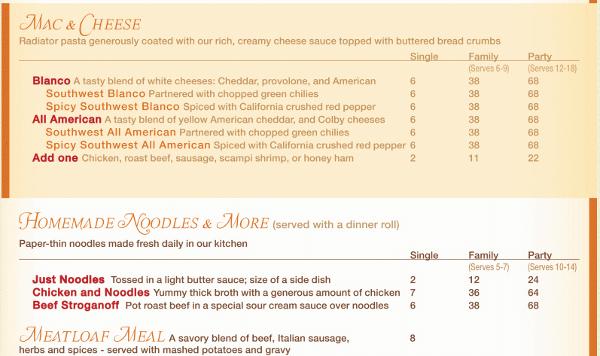 But hey the salad was good. That little bowl in the background is the standard order of regular mac and cheese. Yep, the same store-bought noodles with a thin, slightly sour cheese sauce, and no garnish. This food is literally beige, would it kill them to put a parsley sprig somewhere? The mac didn’t taste all that bad, but was severely underseasoned and didn’t exhibit the best qualities of homestyle mac and cheese: cheesiness, salt. And where was the buttered bread crumb topping as promised on the menu? It certainly didn’t make me want to order the $68 party portion.

What am I getting at other than to complain? For starters, it’s clear that Anna’s Oven suffers from a lack of proper oversight and training. Why were there no processes in place to ensure that meatloaf, pot pie and homemade noodles are available every day when they open? Why did the cook and/or server not feel obliged to inform me that they were serving me something different than was advertised? Why was this place so goddamn slow? Other than providing a forum to feel good about charitable endeavors, are the owners invested in the success of Anna’s Oven? Does this place have a manager? After being there so long, my lunch felt like an obligation, like being at a timeshare presentation or worse, a bad community theater production against my will.

Not long ago, I found a hair in a dish that I ordered from a local restaurant. For many people such an occurrence is a dealbreaker, but after noticing it, I simply removed the hair and proceeded to eat my lunch. The restaurant is a place that I have enjoyed multiple times without incident and I trust them and know that they take pride in their food. But when that trust has yet to be developed, when owners’ work ethic is undetermined and their purpose unclear, missteps turn into grave errors.

Almost certainly, I caught Anna’s Oven on an especially bad day. I’m reasonable, I normally would go back to try more dishes and give them a chance to shine before writing this up. After all plenty of people in town seem to like it. But given this one experience I just can’t justify returning. It may not be fair, but there are too many other deserving lunch spots to try. That being said, I would love to hear others’ experiences at Anna’s Oven, mostly to see if I’m insane for being so turned off.

This place is insane.

For people who like odd experiences, who like to challenge their notions of comfort, for those who can’t abide the ubiquity of tin ceilings, exposed brick and conical glass lampshades, this place is for you. The strangeness here is rivaled only be the old Nichols Lunch. And as with Nichols, just don’t expect to eat well.

Walking into Waid’s I found myself the object of dozens of octogenarian eyes and suddenly wondered if I had mistakenly walked into the dining room of a cheap retirement home. What in the hell was this place? It was quiet, dark and entirely devoid of any redeeming physical characteristic. I’m sure Waid’s used to be cute and retro, but they didn’t have the good sense to pursue a nostalgic vibe. Indeed the 1980s makeover is all too apparent, made more creepy by all of the seemingly unintentionally depressing details: hotel room art, drop ceilings, industrial carpeting, and the blandest of American diner menus.

If the Prairie Village Waid’s was a movie, David Lynch and John Waters would co-direct. There was the guy coughing and hacking up phlegm, three ladies going over every detail of their check to make sure they hadn’t been swindled and a certifiably crazy woman with papers and change all over her table.

Naturally Waid’s is not the sort of place where one expects great food. Ordering a salad never entered my mind, though they have several on the menu. I took forever deciding on my order because I didn’t want something gross. This was a futile pursuit. I can’t begin to tell you what to order here. You’re on your own.

When asked about the soup of the day, our server told us it was steak soup. “But it’s different than it used to be,” she said, “we used to make it with hamburger and now we use…you know, steak.” I did not order the soup.

I’m sure breakfast is passable at Waid’s, it’s not hard to make eggs, bacon and toast after all. Lunch is a different affair, presenting you with possibilities like chili dogs, tuna melts, fried cod, reubens and burgers. I wound up ordering the chicken fried steak sandwich for god knows what reason. Life is too short to eat one more substandard reuben. My sandwich came to me aptly presented but utterly bland and kind of dry since I opted not to use the cup of mayo they provided. Despite a decent appearance my sandwich tasted like nothing and was cooked to death. The french fries, however, were woefully undercooked. You know the restaurant that you always have to take your grandma to when you swoop into town for a once a year Sunday lunch to stave off the crippling guilt of not really finding her that interesting? Waid’s is that restaurant. It’s crazy but a lot of older people have a singular ability to overlook the sheer creepiness of a place in favor of comfort and familiarity. They know the waitress, the know what they like to order, they know how much it will cost. They could be eating in a dungeon for all they care.

I, on the other hand couldn’t help but notice the overwhelming sense of drabness: scratched faux-stained glass, ancient institutional carpeting, water-stained ceilings and water glasses that had been through the dishwasher about 800 times too many. Waid’s is a local chain and one that used to be fairly prevalent in the metro area as I understand it. From what I can tell, there are only 2 current locations: Prairie Village and South KC (and maybe Lee’s Summit?). I’m sure a lot of folks who frequent this place have done so for a very long time and don’t really pay much attention to the details anymore. I am not qualified (or old) enough to know if it has become worse over the years. In its present state, it is just another American casual restaurant in the vein of Big Boy or Denny’s. Thus Waid’s is an imitation of something that had no business being imitated.