International Grocery/Taste of Russia has closed

This was an interesting lunch. I was driving east on 79th just beyond downtown Overland Park, heading god knows where when I saw this little spot I had not noticed before. There is a sign that reads “Taste of Russia.” Next to that is a sign that says “International Grocery.” In front of the door was a placard advertising $3.99 lunch specials with a free drink. A double-take and a u-turn later there I was. Here’s the story of how I went in pursuit of borscht and wound up with middle eastern food…

This place is absolutely nuts, and I loved it. A sign on the door in rambling, verbage described how they would honor any competitor’s coupons and would not be taken by scams or other unscrupulous business practices and so forth. Only the sign said it much less eloquently than that. 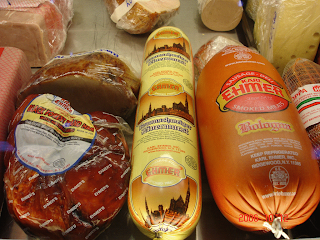 Inside was a small grocery full of all sorts of imported foodstuffs, vegetables in the sunset of their years, and items which can only be described as “knick knacks.” Very gaudy knick knacks. Anyhow, there was also a deli counter full of salamis, sausages, dried and pickled whole fish, and various other delights. But I wasn’t really getting a Russian vibe, mostly because the woman behind the counter was wearing an Islamic headscarf.

While waiting for the woman in front of me to remove 6 dozen coins from her handbag, count them, drop them, hand them over, take them back and hand them back again, I noticed that there were two tables by the front window with menus on them.

I read the menu while the change-lady–who sure as hell isn’t Russian either–finally paid up. The menu was only barely making sense. “What’s good?” I ask the proprietess. “Kabobs” she replies.

Kabobs? I thought this was “Taste of Russia?” I mean, there was even a photo of Russian President Vladimir Putin behind the cash register. I asked about Russian food, and she indicated the “Salami, bologna kielbasas–stuff like that” is the Russian food. She didn’t sound too excited about it so I didn’t push my luck. I don’t want scary Russian bologna unless its prepared with love.

I ordered the kabobs.

She then told me it would take 15-20 minutes for her to prepare the meal. She disappeared behind a curtain for a long time. Someone came in the shop, looked at the menu and left. Someone else came in and talked (yelled) with the owner while she shopped. This was just too weird. I looked around the market while I waited and…hey wait, didn’t meesha post about Russian candy yesterday? Just went back and read the post and not surprisingly, he mentions Taste of Russia at the end. Is this like some kind of weird harmonic convergence? Anyhow, KC’s favorite Russian Jew is correct, there are a million kinds of candy at this place, easily 1/3 of their entire stock. I also discovered a hilarious soft drink called “Cockta” that I wanted to try but there was no bottle opener and the proprietor was hiding behind the magic curtain making my Russian kabobs or whatever. I was pretty much convinced this meal was going to be a disaster.

Jesus Christ that was a long wait, but finally the food arrived, steaming hot in a styrofoam container. And let me tell you, it was good, really good. If you had an Egyptian grandmother who was married to a Russian, this is what her food would taste like.

The kabob was very similar to the kind I had at Holyland Cafe, but came atop the most delicious rice dish I have ever had. The rice was cooked perfectly, and tasted simple and humble, complemented with nutty grains that looked like little brown squiggles, like…well, you ever seen fish poop? Anyway, there was also some chunky hummus which was surprisingly good and obviously made from dried garbanzo beans. The pita triangles were even toasted for my pleasure.

After I ate, I talked with the woman for a few minutes. She is indeed Egyptian and I couldn’t get a straight answer why there was a sign that said ‘Taste of Russia.’ outside. I asked about all the Russian foodstuffs, but she simply said “this is the international grocery, we have everything.”

This is definitely an odd experience, and I could go on and on, but I have rambled too much already. Basically, it’s a great little ethnic market that has a lot of stuff you won’t find anywhere else. I’m going to try the kielbasa next time, but I can’t imagine this will be a regular stop for me, just because the awkward atmosphere. But I’m very glad I went and think everyone should pop in when they are in the neighborhood. Buy some candy.