going to popular movies on opening night?
the chaos of the Apple Store?
Oklahoma Joe’s on Saturday afternoon?
Disney World/Land?

You see, I’m not a people person. And when aforementioned “people” involve JoCo baby shower attendees, a plethora of three-year-old children and people eating lunch before seeing yet another boring white guy speak at the Plaza Library, well I get a little bit grumpy.

But the Mixx is totally good for those all too infrequent healthy/fresh cravings I get, particularly on weekend afternoons after a week of BBQ, Mexican food, brown-bag sandwiches, and deep fried delicasies. Well, at least I don’t eat snack cakes any more, unlike some other people.

This is one of those build-your-own salads places. This is something that is done to reasonably good effect at grocery store salad bars, but the Mixx takes it to the next level. They have some very nice ingredients that cannot be found in the average salad bar, not even the highly-praised whole foods variety. Yeah I eat at whole foods once in a while, so what? So basically you can go into the Mixx and order mixed greens, romaine or spinach; topped with a protein like grilled salmon or chicken, and your choice of any number of cheeses, nuts, fruits, and vegetables. It’s an airtight gimmick, it’s delicious and it works. 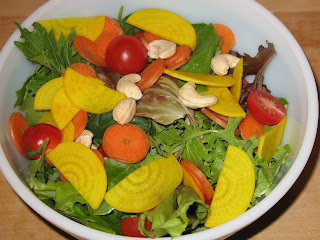 There is always a line at this place, they do a very good business. You have to order at the counter and your salad is made to order. But it can be slow-going. As my co-diner noted “they always act like they are so surprised to be busy.” And it’s true, it’s always a barely controlled mayhem behind the counter, but fortunately the staff is exceedingly kind, which almost makes up for paying $12 for a friggin salad.

Yeah, it ain’t cheap and you will spend that kind of money easily if you’re planning on drinking anything other than water. The desserts are a frequent temptation as well. I believe their cupcakes received one of those ubiquitous “best of” awards from the pitch a year or so back, and the cookies are excellent. But bring your goddamn wallet.

After recieving food from the counter you pay and navigate Kansas City’s most cacophonous dining room to find a place to sit. Seriously it’s so loud mostly becuase there are always tons of kids in there. And the table are, like 1 foot closer together than they should be so it’s always dicey keeping your salad bowl upright while squeezing past some oblivious, no-job-having aging beauty queen and her brood. Seriously the seating area is loud, which normally would be fine, but I just wish that a place so close to the library would be a little mellower. For instance, they sell beer, but I can;t imagine kicking back and having a few at the Mixx for chrissakes. It’s just not a fun place to hang out.

Being situated so close to the Plaza branch of the KC Public Library is great–it’s almost the default restaurant for the institution. I personally think it’s nice to be able to check out some books and read them over lunch at the Mixx. Or you have someplace to eat before/after a program at the Library. But the whole vibe there sort of bugs me. If they waited on me or had a salad bar, I might like it more. Yeah, crazy right?