The few blocks of Troost Avenue from Rockhurst University south is turning into a nice little stretch of locally owned commercial establishments. There are a few thrift stores that bill themselves as antique shops, the sprawling Troostwood Garage, the Blue Star Motorcycle Shop, Stretch’s Flava Ice Cream, J Bones/JA Quan Clothing store, a busy barber shop, a bookstore, a sizeable tattoo parlor, not to mention Coffee Break and Mike’s Tavern * on the north end.

Sure, there are a couple of vacant storefronts, some empty lots, a payday loan place, a sketchy convenience/beer store, and a cool-looking but equally sketchy gas station:

Add to that the rich mixture of cut-rate nail salons and storefront churches and you have a happening little place.

This section of Troost is a nice little mini-neighborhood that people who live nearby actually patronize. It is a veritably bustling little stretch of road, particularly compared to other commercial strips in town that often appear deserted from the outside. The newest business to set up shop in this area is an interesting little spot called Greedy Man’s. 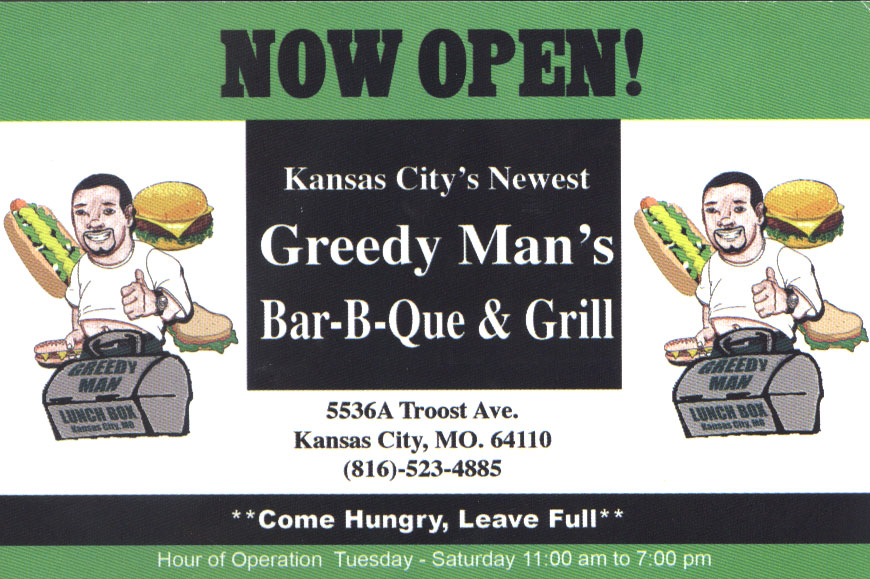 This place is small and easy to overlook. There is a banner above the door that says “Now Open!” or something but the entrance is actually quite easy to miss, even on foot. Don’t get it mixed up with Zap In & Out on the corner which advertises “Beer, Liquor and BBQ” on its sign but only makes good on two of those promises.

Greedy Man’s looks just like a big city corner grill should. It’s small and kind of dingy. A few people are waiting around for some takeout. There are flyers, free publications and pamphlets everywhere. Even better, a little TV in the corner was blaring Krush Groove when I walked in. Greedy Man’s is not really a BBQ joint in the traditional sense. Yes they offer a turkey and beef BBQ sandwich, as well as rib tips but the menu also features chicken wings, fried shrimp, burgers and hot dogs of various kinds.

Not fully prepared for the lack of BBQ items I needed a second to peruse the menu before placing my order. This was a mistake since the phone rang and the cashier’s time was subsequently consumed by the world’s most complicated take out order. After 10 minutes or so I ordered the smoked turkey sandwich. This resulted in 5 minutes of confusion as to “which sandwich” I wanted since they also have a turkey Philly and a fried turkey chop sandwich. She didn’t realize that there was a regular turkey BBQ sandwich on the menu.

Stupidly I had my heart set on BBQ so I insisted on the smoked turkey. And a Coke.

“We have Dr. Pepper” she said.

The small refrigerator next to the counter was filled with various soft drink odds and ends but indeed no Coca Cola or Pepsi. So I had a Dr. Pepper.

It may sound like I’m complaining here but I’m not. I should have observed these signs and acted accordingly. Turns out that Greedy Man’s has its own special fruit juice brew called “Greedy Man’s Tropical Troost.” They also have “KC Peach Tea.” And here I wanted a soft drink from a can?

Likewise I should have realized that the BBQ turkey might not be the best thing on the menu. It wasn’t. Like other BBQ places, Greedy Man’s uses essentially deli turkey or at least a processed meat of some kind. I don’t understand this at all. And they have a lot of turkey on this menu, including turkey burgers and turkey hot dogs. Adam’s Rib uses processed turkey. So does Woodyard and Bates City. I’m going to stop ordering turkey at BBQ places until someone tells me where I can get a real sandwich made from a real bird. I’m depending on you here. 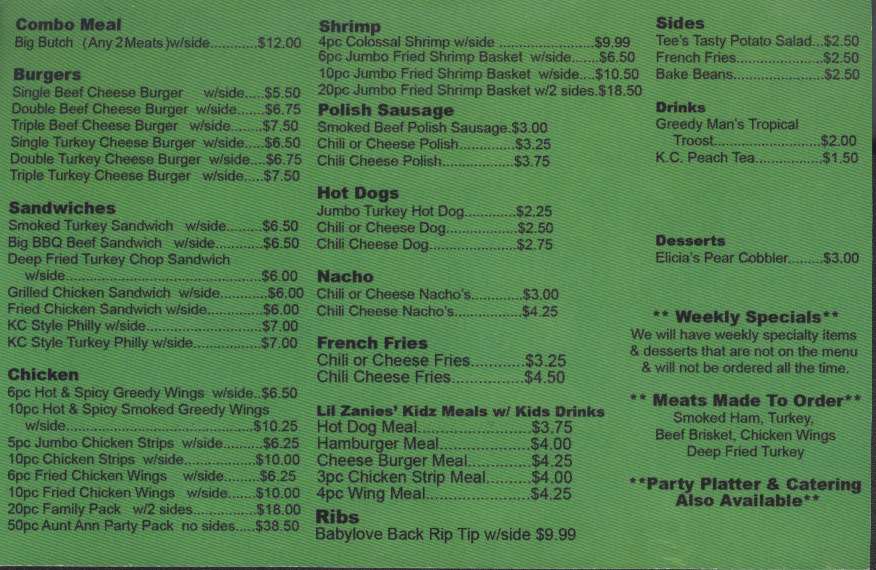 Looking back at the menu I really should have had fried shrimp, one of their burgers or chicken wings. The cashier’s confusion should have been my clue to order something else.

I had to get the beans since Charles Ferruzza named them in the list of top 10 baked beans in Kansas City. Damn they were sweet. Literally sweet, like candy. But something about them was extremely comforting. They were piping hot, a little runny and cradled in a makeshift aluminum foil dish. 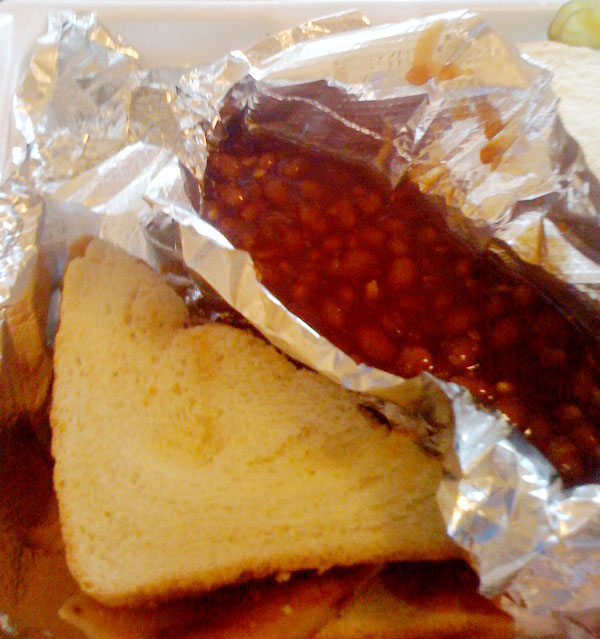 I should point out that the wait was not trivial, about 20 minutes. Fortunately, there was Krush Groove to entertain me. People were constantly coming in the door, placing orders, picking up orders, saying hello. The guy who owns Greedy Man’s is super nice. He checked up on me and the other customers before and after we ate.

The vibe here is very cool and laid back but there are only 3 or 4 tables in the whole joint. This would be a good place to swing by on a Saturday afternoon for a greasy lunch. While I can’t say it has the best food in the world, I also feel certain that I haven’t experienced Greedy Man’s at its best.

* The last few times I have driven by Mike’s Tavern, it was closed. Once was a Saturday evening when it definitely should have been open. Hopefully, things are ok.