I’ll tread lightly here; God knows I don’t want to stir up the legions of opinionated white guys who staunchly argue about barbecue in various public forums around town. Regardless, Gates seems to have a lot of lovers and haters. I think people genuinely appreciate how long it has been around and how much Ollie Gates does in the community, but like so much else in Kansas City the place doesn’t hold up under harsh scrutiny. 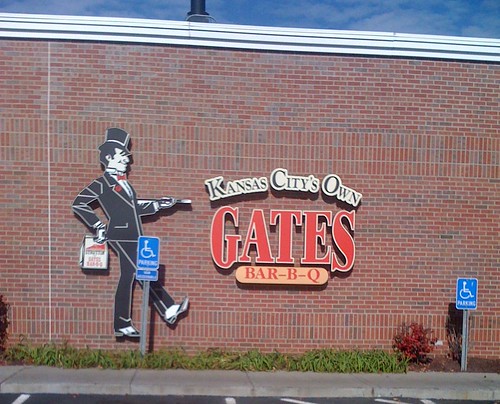 Like most barbecue joints, Gates does some things better than others. People swear by the burnt ends and they are widely considered a close second to LC’s in terms of taste. I found the burnt ends to be incredibly disappointing. I don’t think they were cooked properly because the taste of raw fat globules permeated the sandwich, rather than the delightful rendered fat flavor of LC’s burnt ends. With the recent news that LC’s has been shut down by the health department, we can only hope it comes back even better than before, sans rodents. 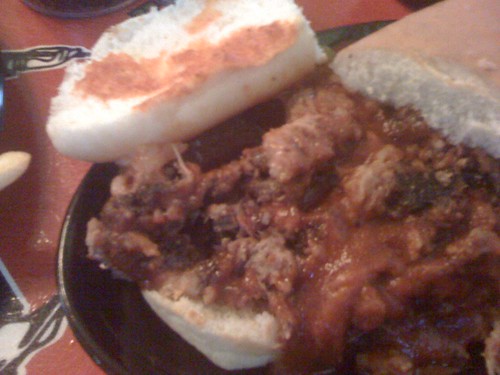 Compare the admittedly crappy photos above to these uploaded on flickr two years ago. It’s not even close. A lack of consistency plagues both Gates and Bryant’s in recent years, which may account for the meteoric rise in esteem for Oklahoma Joe’s and Jack Stack, which are extremely reliable.

I am a huge fan of the beef at Gates. Again, I think that LC’s has the slight edge here but it’s still tender, smoky and full of rich beefy goodness. It is well-accompanied by that glorious Gates original barbecue sauce. Like many of the world’s best food, Gates beef brisket tastes even better cold the next day. That’s why I often get the large sandwich, which is pretty tough for most folks to put away in one sitting. 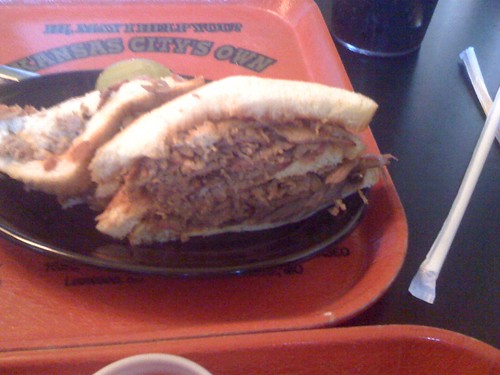 At lunch, Gates offers a pretty good deal: a small-ish sandwich on a bun with fries for something like $6.50. You just order the meat of your choice “on bun” and the fries are assumed. You can also get it on loaf bread if you want, you will just have to utter the preposterous order “beef on bun on bread.” The sandwich is an appropriate size for lunch though I found the sliced pork too dry. I heartily recommend Arthur Bryant’s for all of your sliced pork needs. 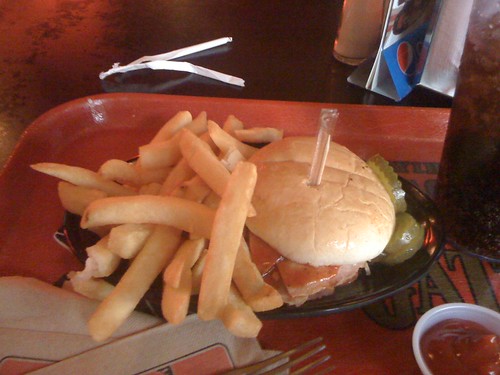 People love Gates’ fries. They actually have pleasing crunch and a decent potato flavor but are a little too processed tasting for my palate. A big plate of fries will also cost you something like $3.75 which seems a little steep.

I think Gates’ sauce is the best in town, an assertion I’m relatively confident in, despite the fact that I have not been to every single BBQ joint in the metro. They have something like 4 different kinds but I like the original the best. Most of them taste very similar in my humble opinion. An employee working the dining rooms recommended the sweet and mild sauce for french fries.

I also like the ribs a great deal, though I haven’t had them in a couple years. They don’t overcook their ribs like many places in town do. The meat does not fall of the bone in stringy clumps which I, for one, appreciate. Like bacon, ribs should not be cooked to death.

This particular Gates location is the newest I believe, and is kind of a flagship location due to its proximity to the business headquarters across the intersection. I’ll never fully understand the aesthetic of the Gates brand. The man with the cane depicted on Gates’ signs calls to mind some sort of turn of the century dandy, or Louis Armstrong’s “Struttin’ with some Barbecue.”

This location is laid out like an old-timey train station which sounds cool in theory but is kind of offputting. Rather than one large dining area, it is split into two small-ish, dark rooms with little fancy entrance doors and old photos on the wall. 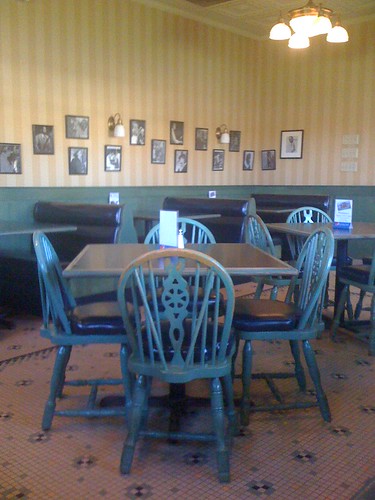 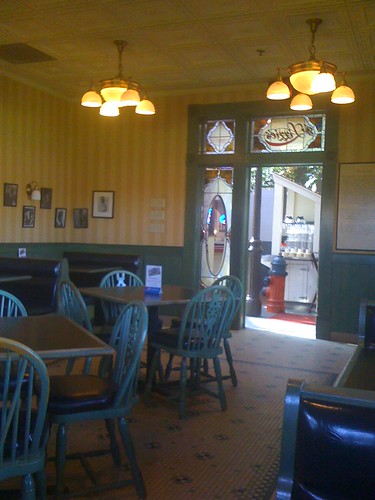 While attractive enough a space, it sort of looks like someone’s well-heeled grandmother decorated it. The center of the train station is a little island fashioned after a ticket window. It is perpetually un-staffed but it is theoretically where one obtains cocktails. But I have never seen anyone having mixed drinks at Gates.

The ordering process is a disaster. Shrieks of “Hi may I help you?” are ostensibly an invitation for you to place your order verbally but there is no guarantee that anyone is actually listening. Indeed they holler it out whether they are facing you or not, often in the middle of a conversation with another diner. It doesn’t really matter, because by the time you get to the end of the line to pay, they won’t remember what you ordered anyway. 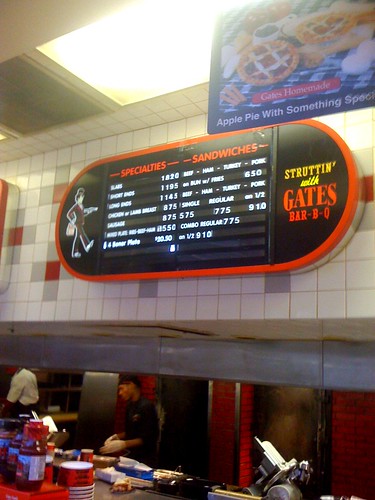 I have been here a lot, and never once has my food been waiting for me at the register. Not once. The ladies behind the line who all are trained to adopt the creepy affectation of referring to each other as “Miss Jones” or ” Miss Fredericks” or whatever, are constantly chattering among themselves and the worn down looking guys in back who actually assemble the food. If I was a betting man, I’d wager most of Gates service problems relate to the cooks not paying any goddamn attention, but that’s just a theory. As you wait to pay, another woman asks you if you want “drinks, sides, fries or pies.” I think this is the lowest person on the employee totem pole but they are usually the most efficient.

At lunch it is not unusual to spend 10 or 15 minutes in line. You will spend that time experiencing a rich mixture of mild annoyance, uneasiness and excitement, but you won’t be bored. Just make sure you get what you ordered. If they screw something up, they will get it right and run it out to your table.

A lot of people mistake the service shenanigans as unfriendliness or rudeness.Nothing could be farther from the truth. When interacting with individual employees at Gates I have found them uniformly helpful, open and even funny. If they seem exasperated, just remember that you don’t have to work in that crazy house of a kitchen. Chill out and wait for your barbecue.
Now it’s time for you all to disagree with me.