I have been to Cafe Augusta probably half an dozen times since it opened last summer. Why haven’t I posted about it? Well, there isn’t a ton to say really. The JoCo populace seems genuinely happy with this moderately classy little cafe and its selection of sandwiches, soup, salads and European-inspired entrees. When it opened it was often crowded at noon, but I’ve noticed lately that business has dropped off a tad. Let’s just call that the Ferruzza bubble. The Pitch’s reputable critic gave it a somewhat positive review that had me there for lunch the same week. Perhaps some of the luster has worn off.

I was moderately pleased with my Cobb Salad on that first visit, though surprised to see that the $8.95 dish did not come with chicken, as most Cobbs do. While the typical bacon, blue cheese, tomato, avocado, etc. came standard, chicken would have been a $3 upcharge, bringing the total to a fairly hefty $11.95, not including beverage or tip. If I’m ordering from a counter, I expect a little more for my money, or just slightly lower prices. Also the avocado was underripe.

While I had become accustomed to ordering at the counter and having my food delivered, my most recent visit saw the unexpected development of table service. This was a nice touch and I found the server to be quite friendly and well-trained. I tried the half sandwich and soup combo ($8.50) with a currry squash soup that was attractively presented. 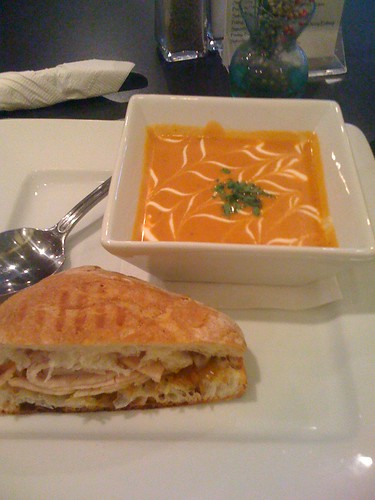 The server had described the soup as “not spicy” but it was actually fairly hot. This was a-ok by me, but other may have been miffed at the false advertising. The smoked turkey and brie sandwich was tasty, though I grow very tired of the ubiquity of ciabatta bread. A crusty baguette would have been perfect. The combo is a decent value for the money, though I find it does not hold up favorably portion or taste-wise against the similar offering at 75 Cafe.

Folks rave about the unconventional take on the tuna melt at Cafe Augusta. It arrives open faced on four smallish slices of multigrain bread. 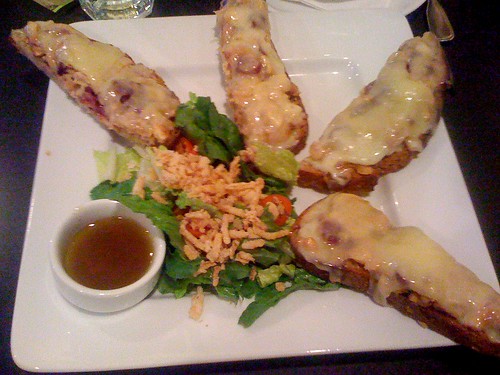 The flavor of fresh ginger is prevalent in the tuna mixture, which also contained grapes and nuts. Overall I liked the sandwich but the sweetness and overabundance of grapes kind of overwhelmed the inherent flavor of the tuna fish. The unusual presentation made it easy to eat though the bread was a little soggy on the bottom. This leads me to believe that the tuna melt is broiled in the oven rather than grilled.

The house dressing on their salads is superb, though the lettuce looked a little past its prime on one of my visits.

The atmosphere is somewhat nicer than 75 and many other local joints. While the European landscape prints did little for my aesthetic sensibilities, I appreciated nice touches like the oversized, interestingly shaped white china and sprigs of fresh herbs in small vases on the tables. The music is tasteful and runs toward classical (far superior to the “smooth jazz” blaring at 75 Cafe). 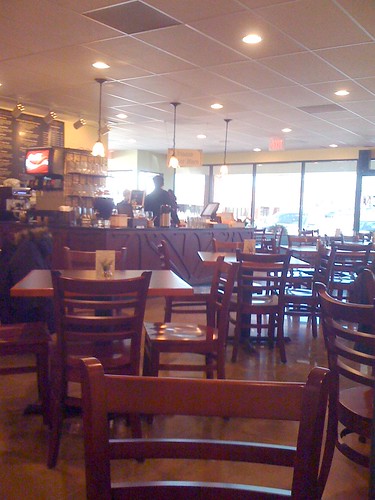 There is certainly more to the menu than I have discussed. For instance Augusta offers German food on Mondays and a series of dinner specials throughout the week. In the end, Cafe Augusta is not bad, but certainly not my first choice for lunch in an area that actually features some very good lunch spots. The decor and menu seem perfect for business lunches or any other sort of semi-upscale meal in which you don’t want to fret about the personal tastes of the attendees.